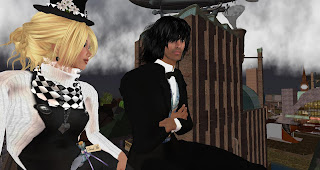 Back to the Future at New Babbage 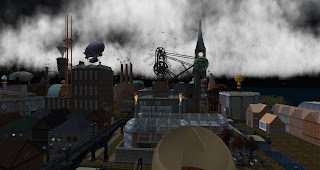 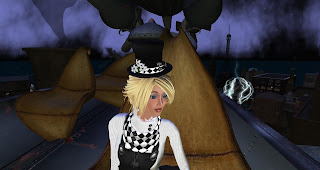 A few days ago, when I presented a simple idea to some colleagues at a national conference, my intent was to inspire them to re-imagine radio and traditional forms of media, by conveying how all platforms are coming together in brilliant ways through virtual worlds. New Babbage in SL has also inspired me to reflect on the convergence of literary, musical, artistic, and scientific genius of the late 19th century and early 20th century. As I stated in my presentation, and my soon-to-be-published book Second Life, Media & the Other Society, a gate had opened then, imagination was set loose, and the world was envisioned as a theater of possibilities. America and Europe became intrigued by Amazing Stories (published by Hugo Gernsback) with its plots often set in the future. Science fiction writers were inspired by the technologies of their era, evidenced by the many social prophecies of new world orders and detailed narratives of curious new sights, sounds, and security (i.e., big screen televisions, walls of sound, and sensory monitors).
The rush toward technologies paralleled the rise of artistic movements. The race to create a global system of communication, in the midst of social and technological change, had become overshadowed by a corporate and public push for a tangible product: in this case - radio. Scientist Nikola Tesla had conceptualized inventions beyond radio, one where images and sound could be transmitted through high-rise towers built in key cities around the world—yet his ideas would fall deaf to “corporate” ears. Tesla ran out of finances before he achieved his vision of wireless communication, connecting the world. His investors were blinded by short-run profits. It is only in reflection that we appreciate such genius. A famous photo shows Mark Twain and Tesla as friends, and being so, each contributed postulations from their respective literary and scientific perspectives.
Ray Bradbury’s Fahrenheit 451 made no mention of anything similar to the Internet, but the nature of media (flat screens and seashell radios) described in his book foreshadowed interactivity that would become increasingly available to the public. He wrote of a new world where imagination was scripted, audience members could participate in story lines, and print knowledge had become dangerous to civilized society. Imagination is the critical element that awakens possibilities—whether science and/or fiction forwards a technological notion is not relevant. It is not so surprising, then, that Mark Twain befriended Tesla, or that the writings of Clarke and Bradbury were heralded as inspiration within scientific communities.
The steampunk community in SL pays homage to, and embraces, the imagination and culture of the inventors, writers and artists of that time period. Virtual societies comprise those willing to reconsider the meaning of reality. Suddenly, we no longer look solely outward to an expansion of humanity, the idea that we are not alone in the universe. Now we begin to look inward toward the depth of humanity; in essence we move toward examining the idea of the human soul in a virtual laboratory, or the Metaverse. This is the landscape and soundscape for magnum machinima. With so many wonderful settings and possibilities - what fiction will you create through your machinima that will inspire literary or scientific genius? Second Life, like machinima, can be about nothing, or it can be about something that relates to people in a special way that is not only timeless to the human soul, but inspires people to re-imagine their life and world(s).
There is a push toward creating block bluster machinima that competes with major motion picture companies and TV networks, and other tugs to brand machinima as the ideal efficient solution for producing relatively inexpensive video projects targeting major corporate and pr purposes. Yes all that is in motion, and overall it seems like a fruitful plan. Machinima producers are becoming quite the entrepreneurs. Neil Postman once said that the real power of technology comes when it can answer "the most fundamental human questions." At that point, it is no longer a tool, but a medium of social expression and meaning. Machinima is not about efficiency in production. It is about capturing the human soul in an amazing new world. That is the message that will compete with other media - its filming location is set in a future that is unfolding now. Its filmmakers are moving inward toward the human soul and through great machinima we can better understand and capture the depth of the increasing convergence of humanity, technology and of virtuality, the depth of which is unknown as of yet. The future is now. And this is the beginning of my attempt to define machinima as art & practice. Join me!
- Soni
[photos taken in New Babbage, SL, Sonicity Fitzroy & Lowe Runo]
Posted by Soni! at 1:14 AM No comments: