The Many Masters of Machinima - continues 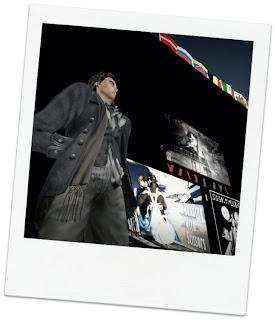 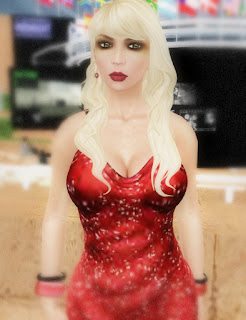 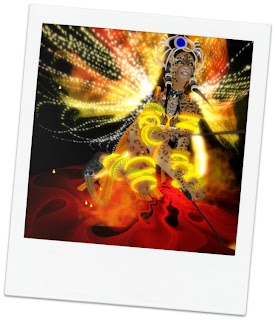 Summer is nearly to a close. The year is swiftly passing by.   I thought I might do a mid year check on the pulse of machinima.  I enjoyed the University of Western Australia's machinima competition once again - MachinimUWA V: Seek Wisdom exhibited more than 50 works.  Major applause to SL UWA Founder Jayjay Zifanwe for all his time and resources for creating a strong community of virtual artists and filmmakers.  One of the things I am personally proud of, is Best of SL Magazine's addition of a feature spotlight called, Masters of Machinima.   I don't always select the person who will be featured, but I have been pleased with the nominations and selections.  They represent a diverse group of seasoned, up-and-coming, and new talent.  It would be impossible to feature everyone, but I hope the series will continue for a long time. Just the idea of promoting the concept of machinima is refreshing, and it continues to be a goal of mine to promote the art and practice of this medium and its potential. 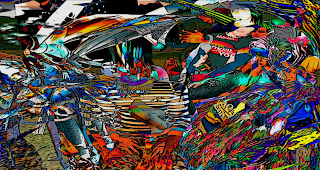 The August BOSL featured the abstract music machinima of JJccc Coronet.  His love and talent for abstract art is projected in his moving images.  His work is also featured on Duran Duran's latest DVD Diamond in the Mind, as well as at its RL concerts.    JJccc, you might easily say, is the official machinimatographer for Duran Duran.   You can find him filming at nearly every Duran Duran Universe (DDU) event in Second Life.  The photos below are mine from Nick Rhodes' 50th Birthday Bash.  Rhodes is a key founder of the band Duran Duran.  JJ is the big red guy!  As you can see, these events get a bit wild.  Head to his channel here. 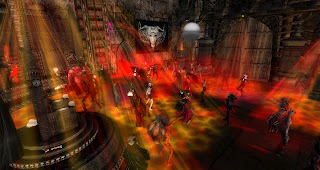 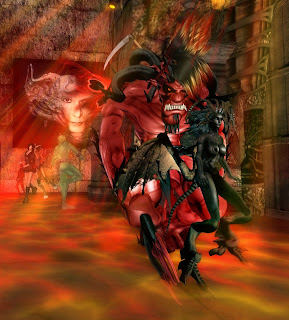 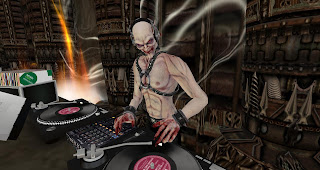 In fact, DDU Community Manager Chrissy Welinder told me, “Nick is crazy for his videos and after every event the first thing he asks me is, 'Has JJccc made a video?'"   By the way, Nick Rhodes is the founding band member and responsible for bringing Duran Duran band members into Second Life and for the creation of the DDU, along with Chrissy.

In July, the BOSL focus was on Star Wars' fame Tony Dyson and MaMachinima's Chantal Harvey, and I blogged about their new adventures with the BobbeKins (see prior blog).

June brought us a focus on MAG Founder/Filmmaker Lowe Runo, co-author of Machinima: The Art & Practice of Virtual Filmmaking (McFarland, 2012).   Ricky Grove and Kate Fosk interviewed us recently for their Machinima ExpoCast (podcast) series on SoundCloud and posted on their Web site. The duo are extremely well versed in the going-ons of machinima so definitely make plans for Machinima Expo 2012.  It's the fifth anniversary, and this year events will be still held in SL, but also streamed live across the Web.   Submission of machinima continues through September 30th, midnight.   And the expo is scheduled typically in November.  Check their Web site for details.  Psst. Ricky Grove's voice was featured in last year's grand prize machinima - BiggsTrek's The Haunter of the Dark, and an exceptionally well done nearly 30 minute story based on Lovecraft's work. 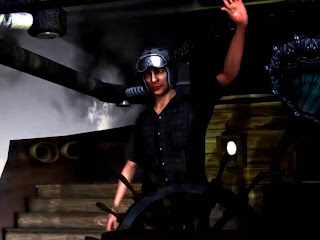 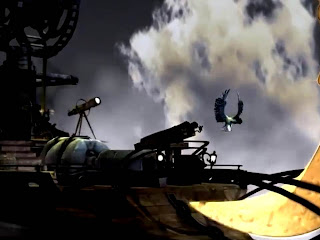 And you gotta love the Expo's 2012 promo - The Moon - by machinimatographer Tom Jantol.  He has been a big part of the events in the past. 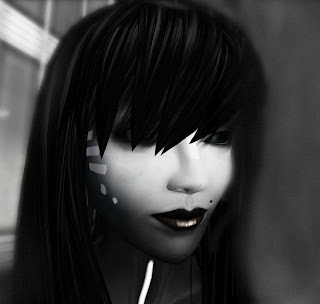 Then in May, we had Emanuelle (Ema) Courtois (above), an amazing young woman filmmaker who brings new perspective to machinima.   Her fashion machinima has brought her real life opportunities and kudos. 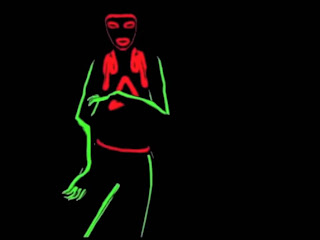 She has had a long relationship with music and imagery, and machinima allows her new creativity.

April focused on Hypatia Pickens, known for her stunning machinimatography, rich storylines, and intriguing voice.  She crafts her machinima well, and it is her attention to the details that underscores her talent. 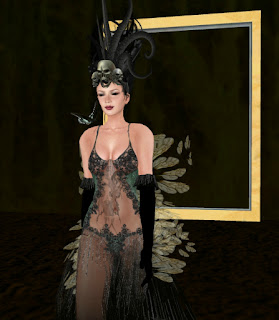 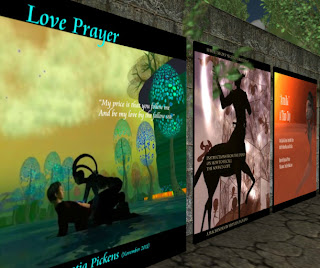 March, of course, started the series with Rysan Fall, one of the first and active members of MAG.   He rarely has time to surface for public events.   He is very engaged in his machinima craft and business.  He is definitely a professional machinima maker, and has worked years perfecting his talent - and as he would say, learning from others in the machinima community.

Coming in September, BOSL's Masters in Machinima features Tutsy Navarathna.  He is a three time winner in the University of Western Australia's series of machinima challenges.  His winning work was The Last Syllable of Recorded Time in the MachinimUWA: V Seek Wisdom competition, and this coming issue will explore his philosophy of machinima and vision for virtual worlds in general. 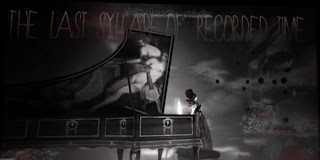 Think of him as the Jim Morrison of machinima - more in the full-length feature. 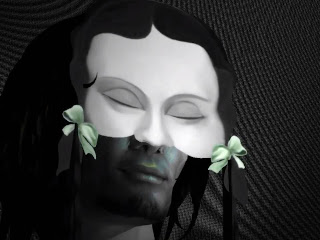 There are so many more talented machinima makers, and machinima creativity can be defined and conceptualized in so many ways.   The future remains open with potential, and no matter the platform, be it a virtual world or not, machinima will continue to evolve. 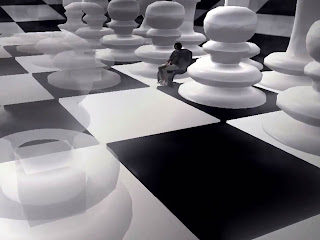 The SL Coming to Steam
With the Linden Lab's move to add Second Life to Steam, and with anticipated requirements for computers to handle higher resolution graphics, there may be some challenges as well as opportunities in the near future.   But the point remains, machinima will evolve regardless of a particular platform.   There are some opportunities for freedom and creativity that would be lost if the nature of Second Life moved away from the virtual world as we know it - and the Lindens considered Second Life merely another game platform.

Alas, much thanks should go to the Lindens for allowing machinima to flourish in this immersive environment.   It has given us a glimpse of things to come or at least possible.   Let's hope that the Lindens truly understand that Second Life is both a social and artistic world that brings us together internationally, in a way that machinima.com and Steam in and of itself cannot do.   The Lindens are truly ahead of their time, and in the coming years, Second Life will be appreciated as the first successful experiment in virtual worlds.

SL is nearly a decade old.   That is quite an accomplishment:  let the experiment continue to flourish so that many can be involved. Every medium needs an audience. Let's not merely be another machinima.com that targets a specific demographic, although they are an important part of the machinima population and marketing equation.  As Ricky Grove would tell us (see the SL Enquirer interview with Ricky, Kate Fosk and Pooky Amsterdam) there is much more out there for creative artists and filmmakers who use machinima for storytelling and communicating to a larger audience outside the gaming community.   Perhaps machinima might go for that television audience who has found its way to the Web.  There will always be programmnig that appeals to certain demographics, but let's make content that reaches beyond the members of our platform, whatever it is, especially at a time when viewers are drawn to quality animated features.

I would have to say, when I was growing up, I never really thought about existing - working and playing - in a virtual world.  But here I am.   I have written two books related to media usage in Second Life, and I feel that history has been made here.  I teach students here;  I interview wonderful musicians and media makers in avatar form as well as connect with their audiences.   I think one of the key moments for me in Second Life was CBS' CSI: NY, for broadcast television had extended its programming reach into an immersive environment, where viewers could not only watch the program but participate in it.   Now maybe it did not revolutionize broadcasting.  But once again, we were offered a glimpse of the future.  Tracing back the history of broadcast media, it takes quite awhile for adoption of new technologies for both economic and political reasons.

There is so much more ahead for us, and understanding that our own particular virtual sky is not the limit is a good start.   Saying that, Second Life is where many have us have put our time and energy - including me.  The caution is, technology always evolves.  I hope the Lindens realize what a jewel they have, and the gems include those creative people who have invested much time and resources so far.   It is a wonderful machinima playground that brings Tony Dyson, Nick Rhodes, and Ricky Grove - and so many other professionals and amateurs - to such an environment. Nevertheless, you can bet on technological and creative evolution; there's more to come....