Music to our Eyes: Learning on The Fly 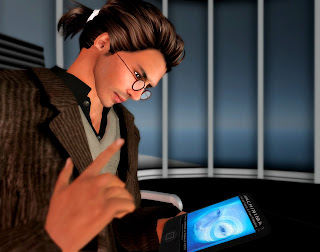 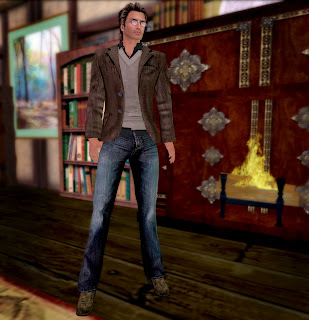 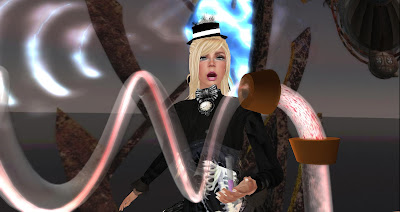 This summer I am taking 10 students under my wings, along with my “Machinima” co-author Lowe Runo.  He (and other staff) will offer guidance & critique sessions during the course.   I have taught machinina as a segment of my long-standing Virtual Worlds course, but this is the first time that I am teaching an undergraduate course to students with majors across my university - Cinema & Photography, Radio & Television, Information Sciences Technology, and Art & Design – with the possibility of Education students in the near future.  The course is called Machinima – Real Time Animation (for Virtual Filmmakers). 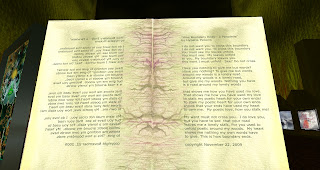 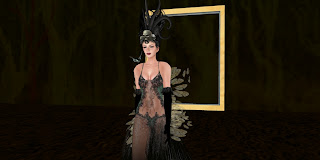 I know other instructors have preceded me, like Hypatia Pickens who teaches machinima as well but rather through her English Department.   Hypatia has a unique blending of poetry and literature in her personal works.  I can’t help but think how that influences her students, and challenges them to visualize the classics.  There is definitely something extremely fascinating with “accessible” and “relatable” filmmaking – and its role in bringing cinematic interpretation of cultural and iconic works. Whereas machinima’s direct influence can be easily attributed to the burgeoning game culture, let’s not forget we have all grown up with some form of animation, from Disney blockbusters, tons of cartoons, and even music videos.  My students appear to be heavily influenced by this powerful cultural connection uniting the entertainment world.  Some favorite classic tunes from Disney’s Beauty and The Beast and The Little Mermaid were uniquely expressed on the Big Screen - a connection between animation and music and literature came alive for parents and children. 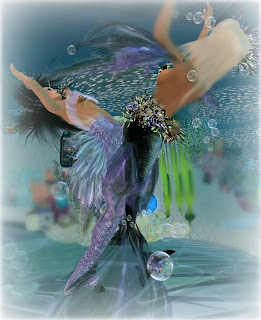 On another level, the music industry is no stranger to animation.   Pink Floyd’s full length music video/movie The Wall has some amazing animated scenes.  Full Metal Jacket is another animated classic for a post teen generation. Time warp to A-ha’s Take On Me in the 1980s, as comic characters pop onto the screen.

I have heard more than one reference to Kayne West as an inspiration from many of my students (while others note Daft Punk).  Here’s an animated feature made by a UCLA student in his sophomore year based on Kayne's Power.  Kayne's Heard ‘Em Say  music video, animated by Bill Plympton (2005), is an example.  Then in 2009, he used animation again for Heartless.  And I love the unofficial animated video on his song, Street Lights.

Michael Saba (2010) presents 10 animated music videos for your consideration, http://www.pastemagazine.com/blogs/lists/2010/07/the-ten-best-animated-music-videos.html.  Among those Top Ten, he listed Kayne’s Heartless and that A-ha classic.  Check out the whole list.  (JJ-5Cs of SLMAG has done an exceptional job with his machinima on Duran Duran's fan parties in Second Life. DD's Roger Moore in animated form has deejayed often for a full house at the Duran Duran Universe, below.) 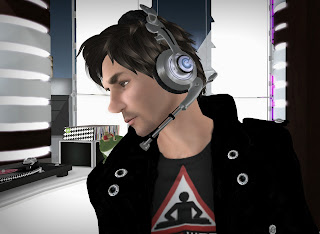 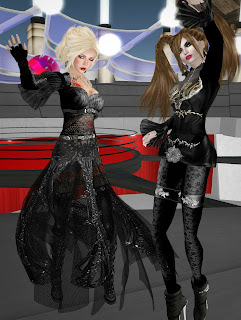 Another great award-winning animated video music series, with a debut nearly five years ago, was based on the alternative Israeli band EatLiz, noted by MTV.  If one gets past purist sensibilities, we begin to see that animation has touched us all in some form or another.  What is different now is the simplicity empowered by modern day machinima.

It is to this world I introduce a new group of students to elements of art and practice, some of whom have made a few machinima of their own with an interest to learn more, and some who have seen machinima and would like to try it out, and then others who are heavily vested in animation and considering how to infuse Maya and other programs into virtual worlds to create unique sets and scenarios for filmmaking.   I had one student experiment with importing his Maya objects into Second Life with much success. 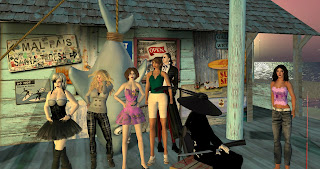 He made a beginning tutorial for his classmates, and I can share that in the near future.   He is a fascinating student (dressed as the Ninja among some of his classmates, pictured above) and I would like to feature his animation in an upcoming blog.  It is certainly worth a full column, as you will see.  His film elements have been created, however, through Maya.  His goal is to connect Second Life with his present style of work and platform.

I think it is important to ask the next generation what they are thinking about animation generally, and machinima specifically whenever possible.  Better than ask, I invite you to do a search of what is out there across the Internet.   In the end, it is all about translating images and sounds in relatable forms, be that of the gaming generations (especially today) or those of us who grew up watching our favorite animations in cartoon and movie genres.   That includes just about all of us now – and the rise of the 24/7 cartoon generation has significantly impacted media producers in recent times. As Pooky implies, we all want to be cartoon stars, don't we? 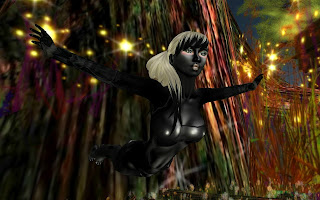 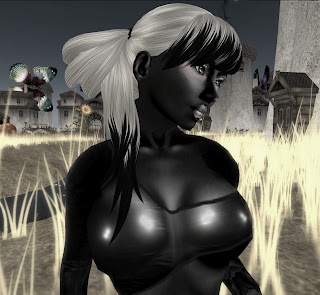 In my class, students will choose their machinima capture platform, and that may or may not include Second Life, depending on their interests.   Second Life will definitely be introduced to all of them, and also be shown as providing a viable forum for communication and conferencing among machinima makers.   We have seen so many wonderful exhibitions, discussions, and expositions within Second Life, from the MaMachinima International Festival, 48 Hours Film Project – Machinmia, The Machinima Expo, Pop Art Lab, and so much more.

We Are All Educators!

It begins by simply watching and talking about machinima.  Sharing will always remain a part of the machinima community, whether or not you collaborate on projects with other media makers.   We all certainly are members of the animation audience, as consumers and critics, in a very real way, virtually.  Really.   And remember someone is always watching us as individual producers and the larger machinima community.   I get that, immediately, as an educator.   We are all educators!

I hope to include those willing to visit with my students this summer!  My good friend Belinda Barnes (above) has helped my students tremendously in the immediate past, and Lowe Runo has done the same consistently for a few years now.