If you are old enough to appreciate the show Mystery Science Theater, you will get this – the idea that even bad movies have a place in our popular culture.   In this case, the hosts of MST were far more intelligent and worthy of watching than the movies they reviewed. 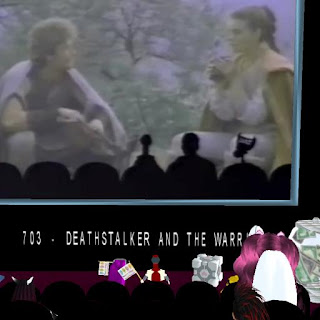 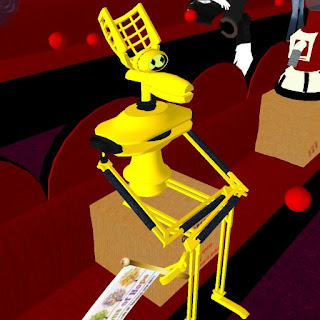 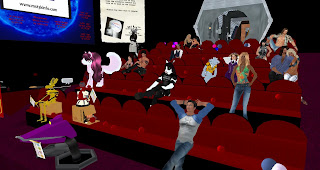 [Photos, May 31, 2011, Squeebee's Mystery Science Theater (MST3K) in Second Life]
Is there a purpose for bad machinima in our society?  What is bad machinima – do we simply feel, intuitively know it, and want to watch it like a bad train wreck.    Do you have some favorite “bad” machinima?
I would be curious to know what you think they are – those “baaad” machinima – as long as you don’t call attention to some of mine, lol.  I admit I have fun creating some “B” roll machinima – or participating into bad machinima. 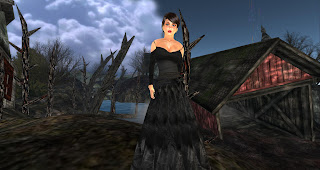 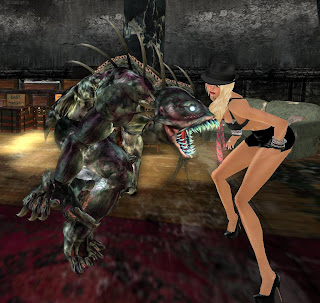 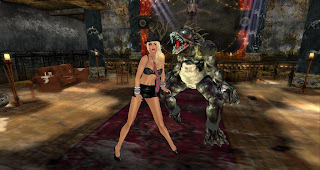 Hmmm, okay, I will share this one made by friend and I one late night for fun while at Innsmouth in Second Life.  I did a serious magazine feature on the Lovecraft-inspired sim in August 2011 for Retropolitan.  The machinima sort of sprang out of just being there; it was impromptu.   It is the time of the season, at least in the USA, for bad machinima:  anything scary that speaks to traditions surrounding Halloween. 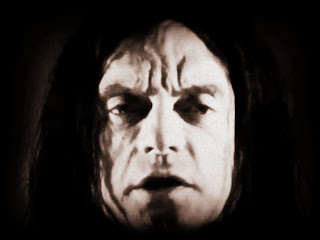 All this came to mind when I read the following story:  The Room' Creator Tommy Wiseau To Star In Web Series.  Here’s an excerpt from the article in The Huffington Post:


From the man who created the worst movie ever made
(and wants to take it to Broadway) comes a video game review show.
Tommy Wiseau, who produced, directed and starred in The Room,
a cult classic widely regarded as one of the worst pieces of
cinematic trash in history, will now appear in "The Tommy Wi-Show."
(Amy Lee, Huffington Post, 9/21/11;  photo incl.)
The show kicks off September 25th, and it will be featured on the Machinima You Tube channel.   Wiseau will provide commentary on video games “while somehow battling alien forces,” and the teaser promises lots of “infinite amounts of sci-fi insanity” (Lee, 2011):
http://www.youtube.com/watch?v=4dKLfmKG0UY
In the promo, the only thing Wiseau states is, “I am relevant to your interests.”    His show appears a bit of mixed reality, mug shots of Tommy in real life with some machinima inserts.
So what does this all mean for machinima?   Perhaps the fact that machinima continues to find identity in pop game culture and our larger cinema industry.
Let’s be thankful that machinima also has an artistic fan base as well, and we can hope that reviewers with a keen eye for quality machinima will add to the artistic integrity of the genre/format.  Wiseau’s show speaks to a segment of the machinima viewing and making population.   There is room for all.
Please do not misunderstand – I love mystery science theater, and Wiseau’s show might be actually funny and strange enough to ensure a cult following.   My point is that, machinima is a medium that allows expression in many different forms, artistically and commercially.   It is as professional as the producer intends for it to be.   But it can also be as fun as making a home movie or campy sci fi for low brow entertainment.
The question of whether Wiseau’s feature will contribute to the growth of machinima is not as relevant as the fact that machinima is finding its place (or PLACES) in our pop culture.  It will be interesting to watch how it is perceived in the coming months and years among audiences and the media makers, and how it evolves with and among the various facets of entertainment arts.
Note the list of advertising slogans, and replace the client name with “machinima.”
Just Do It – Nike
We Move People – Bombardier
What Happens Here, Stays Here – Las Vegas Convention and Visitor Authority
It's not TV, it's HBO
What Would You Do for a Klondike Bar?
Is it in you? – Gatorade
Ideas for Life – Panasonic
Made from the Best Stuff on Earth – Snapple
Got Milk? – The National Milk Processor Board
Think Outside the Bun – Taco Bell
The Best Part of Waking Up is Folger’s in Your Cup – Folger's
I Live for This – Major League Baseball
Don’t Leave Home Without It – American Express
Maybe She’s Born With It. Maybe It’s Maybelline – Maybelline

I am waiting for “Got Machinima?” to be sported on T-shirts everywhere!  And think of what you would look like with a machinima mustache.  Maybe we could feature the likes of Richard Roundtree, Geraldo Rivera, Burt Reynolds, Tom Selleck, Salvador Dali, Charlie Chapin, Groucho Marx and those up and coming machinima stars and producers – maybe Wiseau.... 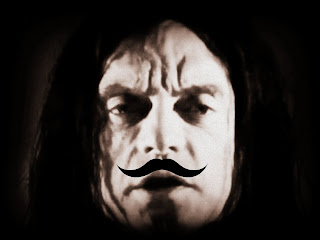 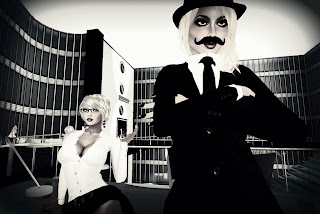