The Science of Collaboration 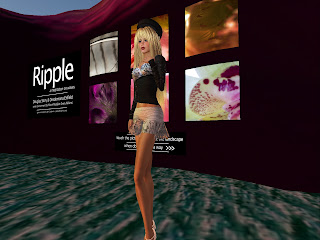 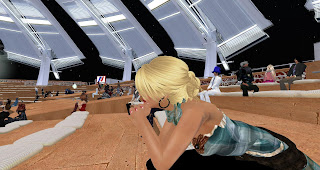 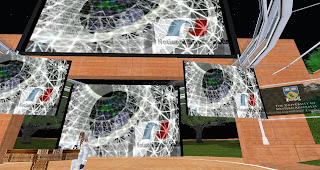 Science Fiction is always a great machinima theme. For this blog, we are dealing with the reality of SCIENCE as a topic. Hmmm, I hear Thomas Dolby's 80s ditty She Blinded Me With Science in my head now. In this blog, we do a bit of space travel, and I conclude with a note on some serious wave action from an installation called Ripple.
Second Life is the perfect place for exploration and for collaboration among scientists, musicians, machinimatophers and educators. SL7B's theme was all about unexpected collaborations. Although well-attended, the National Space Society-University of Western Australia machinima event did not get the full attention that it deserved - until now, LOL. I have touched upon in my previous blogs, and in other blogs, but let's review.
IMAGINATION = EXPLORATION
I must commend the National Space Society's decision to sponsor a "space" themed machinima competition to bring awareness to its mission. One of the key presenters, NASA's Archivist Llewellyn, explained, "The imagination, curiosity, and desire to explore the universe underlies the heart of the National Space Society’s mission." She continued, "With today’s technology, and a virtual world environment like Second Life, average people can bring their vision for the future of space travel to life on the big screen, just as they can imagine and build them in Second Life." The machinimatophers filmed at the National Space Society Island and other SL locations to fulfill the theme. She invited attendees to learn more about machinima at her lecture at the United States Air Force’s “Lunch and Learn” on August 6th at Huffman Prairie. I think it would be wonderful for professional machinimatophers to continue such partnerships, showing support in whatever ways possible.
The June screening was held at the UWA-BOSL Amphitheatre - which is now open for many such events. The University of Western Australia partnered with the NSS for this contest and event. Aview TV founder LaPiscean Liberty was on hand to help with the screenings, and Sophie Yates video taped the event.
IMAGINATION = COLLABORATION
As part of the contest, CraigLyons Writer permitted his music to be used in the videos. His work has been featured nationally and internationally, including TV programs such as "The Real World" and "So You Think You Can Dance." CraigLyons noted, "Machinima is the future, and I'm so excited about this contest...As far as I'm concerned, everyone is already a winner - The attention on low-impact filming, space exploration, and music is amazing!!!" 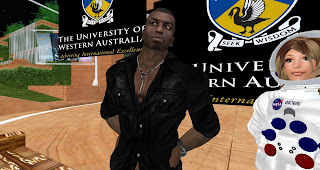 He added, "I'm here meeting in RL with Rysan Fall, the director/producer of my 'Across The Universe' video!!" Rysan popped into the screening to say a few words after the audience viewed a video that he produced for U2's Glastonbury's Concert in RL England. He is becoming quite the celeb machinimatopher. 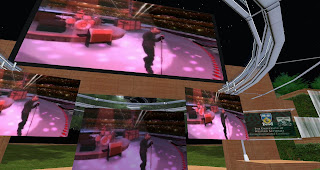 Producer Ian Pahute kicked off the event with the first machinima, by saying a few words about his work: "And in that moment - in a space between the formal structures of mission communication - to stand back and be with yourself and contemplate the enormity of just where you are... and to take a moment to reflect on the history that has helped you / us get there...Ladies and gentlemen, I present 'A Reflection." One by one, the machinimatophers came up to the stage to present their work. 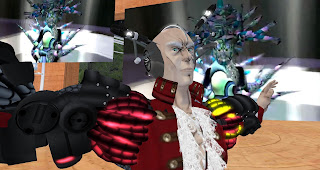 THE JOURNEY TOWARD THE FUTURE
Some highlights included Cisko Vandeverre's appearance with his alien alt. He was one of the many professional contestants. The productions were varied in style and content presentation. Other machinimatophers were Aiden Witrial, al Peretz, Chenin Anabuki, Earth Primbee, Flurry Fargis, Ian Pahute, Iono Allen, and Rocksea Renegade.
The winner was the beautiful and exotic Rocksea Renegade, who impressed the audience with two videos. The winning video was...“Dreamer's Journey.” 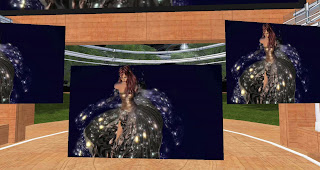 She concluded the ceremonies, saying: "I am deeply fascinated with the idea of space exploration, I champion people's efforts to further our knowledge as well as attempts to expand our presence in the Universe. I truly believe we are not alone in the Universe, with such a massive expanse of space it is impossible to believe we are the only intelligent beings around. I hope that, one day, our dreams of being amongst the stars will become a reality. So here's to the future!"
Watch her video, along with the others here: nss.org
SCIENCE + ART = IMAGINATION
As I close out this blog, I will drop in a plug for PRO-MAG Reviewer Doug Story's installation work - "Ripple." It implicitly speaks to how science and art can be expressed collaboratively and creatively within virtual environments.
Ripple at http://slurl.com/secondlife/Ars%20Simulacra/152/58/1029
More on that @ AVIEW. 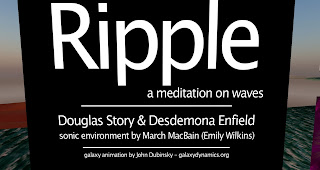 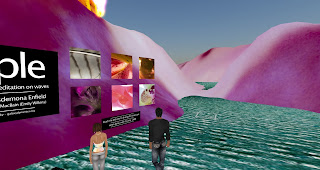