The first of a two part series....musings on machinima 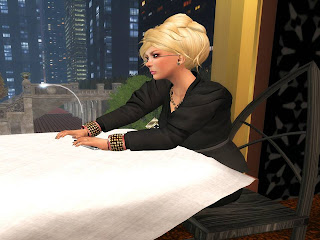 The year has passed by so quickly.   Machinima as a form of expression has been very good to many of us.  Some of us have created machinima communities in which we engaged in dialogue and collaborated on various projects.    I enjoyed revisiting the 2010 Yuletide production "TheNight Before Christmas..." by Celestial Elf, who rewrote Clement Moore's classic poem. Voicework by Cisko Vandeverre should be applauded, as well as Celestial's strong cast of performers and contributors. 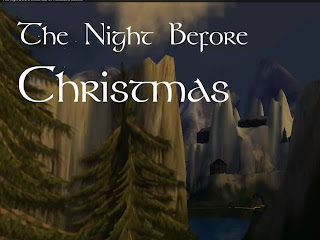 Two years have passed since then, and Cisko announced his plans to leave behind SL at the Machinima Expo.   We hope that he reconsiders, for the future has only begun for machinima in virtual worlds.  Marshall McLuhan would see such spaces as pathways of extension for the media maker and audiences.   It is the space within, and that space emerges from within our imagination, tapping into fears and fantasies, while elaborating notions of reality.    Media has always been iconic of human life.    It is somewhat representative at best.

For me, the art of virtual life is expressed through writing and the imagery that complements it, propels and projects it from one's imagination onto our computer screens.    Last year in December, I madly wrote and published a storybook photographed in Second Life (a sort of children's tale with an adult message regarding technology), with Lowe Runo, Belinda Barnes, and Kara Trapdoor helping to set up the shots with animations.   Live action was photographed, and the photos richly illustrated the words.   Words and images can be wonderful allies, neither should be dismissed as insignificant. 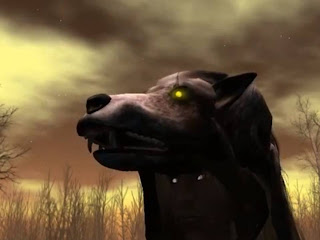 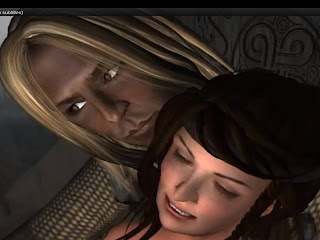 This year's Machinima Expo showcased the beauty of imagination in all its forms and platforms.   The complete list is available at MachinimaExpo.com.   All worthy of review.  The Jury Prize Winners were "The Last Syllable of Recorded Time" and "MetaSex" by Tutsy Navarathna, "Unfinished Painting (Dreaming in New Orleans)" by Miron Lockett, "Wulf and Eadwacer" by Hypatia Pickens, with the grand prize winner being "The Chapelside Deception" by IceAxe  (Iian Friar).     The Audience Choice Award was  presented to Friar for "Unfinished Paintings."

In "Wulf and Eadwacer," Hypatia explores the power behind words;  image and motion intensify  the audience's experience.    Ancient words and worlds can be relived in Second Life, and in the film world in general.     Imagination is not bound by time, set, or any sort of visual platform - or language for that matter.

Machinima at its core goes back to the idea of using a machine to produce cinema.   Yes, it started with game play, but it could not be contained to that.  Machinima's beauty has evolved into an opportunity to freely create what we imagine, and to share it with others or merely ourselves (projecting our imagination outside of our being into our computer).    The "machine" has become a McLuhan extension to our goals, needs, wants, desires, and budget.     Ideas are captured.   Beauty is in the eye of the beholder.     Beauty is also disarming, and sometimes we forget the idea - the substance - the message - must go beneath the surface, to the depth of one's soul.    Can  machinima do that?   Well, ask yourself, can the cinema do that?   That is your choice.   Numerous books by film scholars have been written on the topic, and now machinima finds itself at the heart of such discussions. 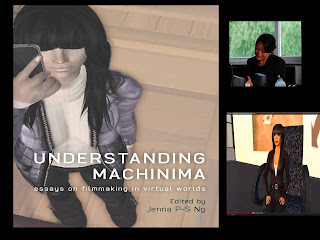 A book worthy of note along this regard is Dr. Jenna Ng's  (December 6th, Continuum) Understanding Machinima:  Essays on Filmmaking in Virtual Worlds.  Her edited collection begins with Dr. Henry Lowood's Preface, who had previously edited another collection called The Machinima Reader (with Dr. Michael Nitsche, MIT Press, 2011).  Nitsche contributes to Ng's book, and at least a couple of essays discuss Second Life in particular (based on titles).  The academic community furiously unravels machinima  as a critical form of expression(at least in long form, for trade essays and journal articles preceded these recent books); its significance to one's viewing experiences, as in how identity, society, and the very essence of storytelling become portrayed, provokes us further to elaborate on its role in contemporary media. 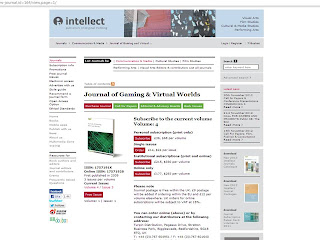 Such books are well needed for critical discussion, especially at this juncture in machinima's evolution. The book  Machinima: The Art & Practice of Virtual Filmmaking (with Lowe Runo, my co-author and inspiration) - leans toward the practical matters of making machinima, with special emphasis on storyboarding, character development, sound, lighting, post production, copyright issues, exhibition, and education.   Knowing one's craft, understanding practice, is critical to the making of visual fabric. Practice and art inform one another. 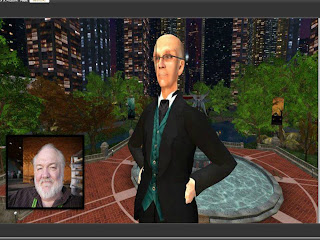 For a good summary of our book, read the review by Machinima Expo Co-Founder Ricky Grove's (M.A. Yale University/Hollywood actor/bookseller) at Renderosity.    We also appreciated the kind words of Dr. Sarah Higley, who reviewed our book in a forthcoming volume of Journal of Gaming and Virtual Worlds.   Moreover, look for her chapter in Ng's edited collection.

As the year closes, it is appropriate to appreciate "Machinima" in its various conceptions  - as a metaphysical concept that bonds us on one level philosophically and at another level separates us technically.  To me, a partaker of Second Life, it is a means toward opening one's senses to virtual expression in all its diversity.   This avenue would seem to hint toward the need for balance between method and message, with the greater goal being the latter.  Most machinima films (and derivatives) appear online; the Internet has fostered an emerging community of independent producers. "A new story is beginning to emerge," stated Dr. Howard Rheingold in 2008 on Ted.com.  He spoke then, and continues to lecture, about the changing model of media making and communication, in which collaboration and participation are central.   Rheingold has long inspired me, and is one of the first to explore the collective undercurrent that drives the Web.

Media Arts in the Virtual Life

I know machinima making and viewing has helped me appreciate the virtual world in which I work and reside - Second Life.   I have written two books related to virtual worlds;  the first one being solely dedicated to media's role in Second Life, and the second springing from Second Life's machinima community and extending to other virtual worlds and platforms that allow for innovative and interactive film experiences among in-world actors and filmmakers - and on the horizon audiences more participatory than thought possible.

As 2012 departs, let us not forgot how education can help define and critique our craft, as we learn from one another in a distinct community of virtual filmmakers, where the novice and the professional showcase their work together.  Jay Jay Jegathesan is at the helm of the University of Western Australia's collaborative spirit in bringing together (and building) a large community of machinima (and virtual arts) enthusiasts. As Manager of the School of Physics, his art-science-technology triangulated perspective is actually indicative of Australia's pronounced move to become a leader in digital culture globally.  The University of Western Australia has its virtual base of operation in Second Life.  That might change in the future as new worlds emerge, but it has accepted the challenge of being on the forefront of the media arts - and thus UWA participates toward virtual development along this line and has done so since 2009.

Ray Bradbury's Fahrenheit 451 tells of cinematic and theatrical living room experiences where an individual engages with the screen, role playing within the film or TV show with other characters. To me, that possibility exists within Second Life, as well as other virtual worlds in the near and distant future. If nothing else, science fiction authors have taught us - first we must imagine. Move beneath the surface, below the epidermis that protects us, to the depth of the message. Technology should follow, not lead. The story crafted in-world should not be bound by what some see as technological limitations - whereas others perceive them as challenges. The future of storytelling should hold promise for those daring to experiment. Failure leads to success. Success sometimes leads to the mundane and trite. Every good character actor knows that it is important to live the part, and in Second Life that is achievable. Cyber-cinema may influence and shape our messages to a certain extent. As we become more immersed in virtual experiences, the cinematic machine (think Jim Carrey in The Truman Show, 1988) - always present - will be seemingly invisible, be that good or bad.  I hope there will always be a strong community of independent media makers in the virtual realm.

To be continued....Part II, next week.