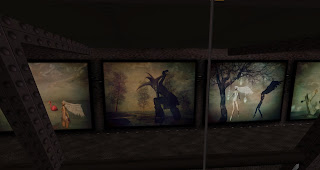 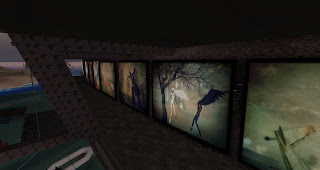 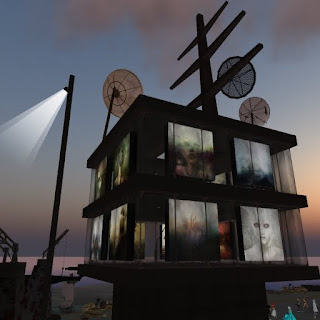 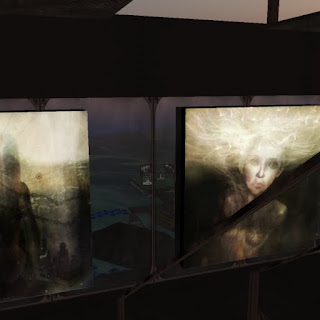 REIMAGINE CYBERFEMINISM & MACHINIMA
Photos by Sonicity Fitzroy: The Second Life exhibition Neal Stephenson's Snow Crash, part of the Imagine Festival
This amazing collection of images of humanity and technology expresses the inseparability and convergence of person and machine. In this blog I delve into framing machinima through the lens of cyberfeminism - in essence, the consequences and opportunities for the infusion of women and machine along the virtual path of cinematic expression through machinima. 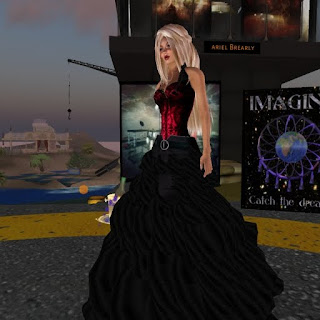 Women in Machinima: Series Conclusion
I was recently invited to write an article that focused on women machnimists in virtual worlds, particularly Second Life. I have attempted to condense my lengthy academic discussion into a blog series on whether whether there is a a feminist perspective - or let's just say a woman's perspective - in machinima and how might it be utilized to understand the role of women in virtual worlds. This is the conclusion of five commentaries that have been posted over the last several weeks. I am collapsing parts IV and V into one blog. (I took a brief diversion to cover women's role in the 48 Hours Machinima competition in Second Life.)
Part IV: Cyberfeminist Expression in Machinima
Verena Kuni, in her 2004 article "Frame/Work," asks, "What is contemporary cyberfeminist art? Who is producing, who is processing it? Where is it to be found? How is it to be defined? Are there even any contemporary cyberfeminist artists? And if so, what about their public recognition?" (136). Finally, how do such questions inform "academic discourses on cyberfeminism?...Cyberfeminism has had an enormous impact on the visual arts today [and]...has worked to transform art - and the artists themselves." 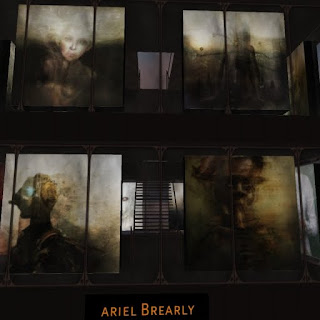 Can one apply such questions to the art and practice of machinima making? As Kuni explains, cyberfeminism is "a revolutionary strategy, a way of life" (143). In machinima, it provides the producer and viewer a way to assess political and social perspectives. The machinima, or the art, becomes a cultural activity. Kuni adds, "New media is not essential for cyberfeminism art practice, but it does offer possibilities for working directly with the artist-audience relationship, and exposing multiple, complex overlapping meanings within the same piece - useful for cyberfeminists determined to challenge the certainties of our society" (145).
As Elisabeth Strowick explains, "the digital act...articulates both relationship" between the real and virtual self "as simultaneous" (316). In a sense, it is the interface between the performance of the real and virtual, and how gender impacts this relationship, that is critical to examination. Ingeborg Reichle in "Remaking Eden" reminds readers, "The transgression of art and life or of human and machine was the explicit goal of the historical avant-garde of the 19th and 20th centuries, in particular of the Italian futurism" (251). Identities blur as human and machine become one entity. The genesis of the word machinima draws from a conceptual assimilation of machine and cinema. The viewer and the producer accept the virtual platform as a plausible environment to tell the story or communicate a message. Machinima plays off such anxiety and quests for identity in virtual worlds and spaces.
Nayer questions whether "the possibility of multiple and different identities mean that the problems of embodiment in real life - oppressions, harassment, exploitation, pain - are resolved in cyberspace" (118). That, of course, is optimistic for "the role and impact of technology" is contextualized by social and cultural experiences (118). Technology is a tool toward achieving an outcome. Machinima is a tool that provides opportunities for artistic and communicative expression, and it might be thought of as a cult artifact of the male-oriented game world. But the practice of machinima is increasingly performed by women. Virtual worlds like Second Life provide a level playing field for men and women. Whereas the portrayal of the game world has been typically from a male perspective, women machinimists present another look into virtual communities.
Part V: CyberFeminist Pedagogy
Katy Campbell, in her article, "Power, Voice and Democratization: Feminist Pedagogy and Assessment in CMC," explains that technology, intentionally implemented, might assist in facilitating a collaborative space for dialogue beyond "social barriers of sex, age, race, physical appearance..."(Campbell). Machinimatography can merely reflect on what is going on in a virtual world, or it can offer a different lens to understand one's experiences in RL and SL. The machinimist cannot readily isolate their human perspective from their filming. It is the human eye that cultivates the machinima. Particularly in a residential game like Second Life, the filmmaker becomes the storyteller that bridges the two societies, real and cyber. The SL camera lens allows one to reevaluate gender and cultural stereotypes, to reconsider issues of social justice, to participate in recreating history and literature through role play and acting, and to serve as an expressive and experiential medium.
Machinima gives voice to women's issues in virtual and gaming worlds, and it also allows stories to be told without voice. It can be a platform for autobiographical and biographical works, or be used as an advocacy tool for social issues. It can help one rediscover and retell the stories of significant women. Machinima can be a vehicle to tell the ordinary stories and experiences of women in the gaming world.
There is an inherent mentoring among women machinimists that ideally should take place - and does at times - to foster unique gendered perspectives on machinima as a representative art form of not only the futuristic notion of cyberfeminism (as demonstrated in part through virtual worlds) but of women in all their diversity of appearance, motivation and culture. It is sometimes easy in the rush of life to forget that we, as women, are participating and crafting our futures, and our decisions become the foundational principles in the architecture of virtual life. As filmmakers, the final work is often all that is seen. But the process is of utmost importance toward the authenticity of the work.
That has been my motivation behind this series on women machinimists - to call attention to the significant role of women as media makers in the shaping of cinematic expression and mediated daily life, be it virtual or just forward thinking in the real world.
References
Campbell, Katy. "Power, Voice and Democratization: Feminist Pedagogy and Assessment in CMC." Educational Technology & Society 5.3: 2002. Web. August 28, 2010, from http://www.ifets.info/journals/5_3/campbell.html
Kuni, Verena. "Frame/Work." Cyberfeminism, Not Protocols. Eds. Claudia Reiche & Verena Kuni. Brooklyn, New York: Autonomedia, 2004. 133-148. Print.
Nayer, Pramod K. An Introduction to New Media and Cybercultures. West Sussex,
United Kingdom: Wiley-Blackwell. Print.
Strowick, Elisabeth. "Cyberfeminist Rhetoric, or The Digital Act and Interfaced Bodies." Cyberfeminism, Not Protocols. Eds. Claudia Reiche & Verena Kuni. Brooklyn, New York: Autonomedia, 2004. 301-324. Print.
Forthcoming, Machinima: The Art & Practice (working title, McFarland, 2011) by Sonicity Fitzroy and Lowe Runo. The Professional Machinima Artist Guild graciously provides syndication of Sonicity’s blog Magnum: The Machinima Review to Aview.TV/Sonicity/
Posted by Soni! at 3:53 PM No comments: