Bring on the New! Second Life, Big Data, Big Change, And That's Just The Beginning: What's Ahead for Machinima


Parlor Rooms of the Virtual Kind

"Most Americans did not have televisions when Bradbury wrote Fahrenheit 451, and those who did watched 7-inch screens in black and white. Interestingly, his book imagined a future of giant color sets — flat panels that hung on walls like moving paintings...." - Johnston, 2007, on Bradbury.

It's been awhile since I have written on this blog.   It is not that I have not thought about machinima;  in fact two days ago I finished a 10,000 word chapter on the subject, particularly focusing on virtual worlds - and particularly Second Life.   I still believe in Second Life as a creative medium.   Writing the chapter, I had some time to reflect on Peter Greenaway's vision of machinima (rewinding to his in-world keynote at the 2010 48Hour Film Project Screening for Machinima) -  the idea that we should consider SL machinima as a means to challenge conventions of filmmaking, television, and even machinima itself (as it has been thus known).

One person who has done this repeatedly is "immersivist" artist-filmmaker Bryn Oh.  I am ever impressed of her talent, and how she is redefining what is possible in virtual worlds.   I don't need to reiterate her projects.   She discusses it well on her internationally renowned blog, and she is well blogged by others.    I have provided her link below, in the unlikely event that you don't already know it. 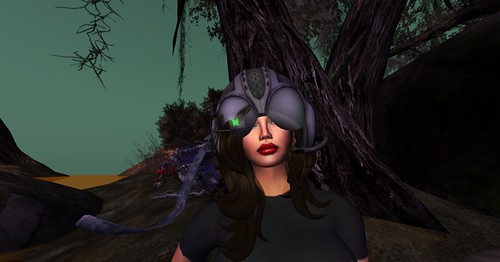 With Oculus Rift, and a "new" Second Life, so to speak on the horizon, I am wondering what machinima will be like in the near future.   Let's think Bradbury's four parlor wall "television" screens, but the viewer is far more than that - not just a viewer, but a participant.    The living room is the virtual room.   So it goes.   I would hire Bryn to design it for me.    Lowe's Home Improvement now has a virtual room where you can literally "rez" your vision for your living room, kitchen or whatever.   Or what about this video from 2011 from University of Groningen - a sort of moving painting that one creates by touch.

Think about buying your box office ticket at your local theater, heading down the aisle past the seats, then walking into the screen, and becoming part of the cast.   It's happening now in a sense.  A screening room takes on a new meaning, blurring reality and virtuality with you in the midst of the visual play.  Sounds like Second Life.

Another one to follow, along this line of contemplation, is Mad Pea's Mari Mitchell, founder and director.   Immersive storytelling.   Interactive Adventures.   Take an adventure with MadPea in Second Life.   But while you do - KNOW THIS IS THE FUTURE - NOW.    Every year, I know that I am experiencing a hint of the future, of art, entertainment and life -  as an active participant in Second Life.   I don't have to be a builder or creator (although I am in my own small way);  all I have to do is just be here, in Second Life.    Applaud the advancements that already surround me, and know that I am on the tip of a whole new world, still unfolding.    I am tasting a bit of the future, and my imagination can take me the rest of the way.  It helps when you have talented artists like Bryn and Mari's crew leading the way.

Bryn and Mari are already on the cutting edge of cinematic experiences, with virtual worlds as the larger medium of which machinima is a part.   In a sense, it is walk-in machinima.

Finishing my chapter made me think how amazingly talented these Second Life members continue to be, and how committed they remain to Second Life.  They are poised for the future, and as virtual worlds transition to allow for further interactivity, you bet they will be there for the adventure, leading the  way.

Sometimes we have to be reminded that change can be exciting and not to be fearful of the edge.   Bryn's latest blog entry is a significant read, given the new emphasis on Big Data.   At this point in history, we are learning how to retrieve and interpret data creatively and visually.    How such data will ultimately "improve" creativity is a fascinating subject, and it is certainly worthy of consideration and in the news lately.   Media research has often been data driven, with mixed consequences.    It is not data that is the problem, it is how it is used.    If it is employed to improve creative practice and allow for further audience interaction,  that is something to be embraced - to complete the feedback loop (in that old communication model based on old technology and little say from the audience).


If that data is used to help us to create immersivity to a greater level - with the possibility and reality of audience participation at the forefront, then bring it on.


For more info about these sites and exhibits, also check out Kara's Korner,  http://karasecondlife.blogspot.com/